Send some poetry to a friend - the love thought that counts!
Poems for the People   -  Poems by the People

Okay, that particular date and time is when I officially registered the domain, netpoets.com, with Network Solutions. In truth, however, the web site that was soon to be hosted on the domain netpoets.com had already been in existence for several months.

From our first newsletter:

Less than three months ago, during the second week of November, 1998, I added a new subdirectory called /poetry to one of my existing web sites (at rcarnell.com). It was little more than a toy, a chance to try a few new web design techniques in a practical setting. I posted a score of poems on the site, some of my oldest work, and invited others to join me.

To my pleasant surprise, a few actually did. On December 5, I received our first poem, titled "Serenade of the Sirens," from an obviously talented poet calling herself PoetDeVine. Two days later, I found two more poems in my mailbox, "Unforgotten Words" and "Just A Little Longer," both by Maria Byrne. On December 11, Michael Anderson submitted his first poem to Passions, "Sleeping Beauty," followed the next day by "The Miracle."

Five poems in the space of a week seemed like a lot, especially when they were such extraordinary poems. Suddenly, there was a small tickle at the back of my mind, whispering suggestions that maybe - just maybe - there were other people out there that shared my passion for poetry. I half-heartedly spent all of fifteen minutes one night submitting Passion's URL to a handful of search engine.

By the time Christmas arrived, we were receiving maybe five or six poems a day, along with about 80 visitors a day to read those wonderful works. Perhaps more importantly, I was also receiving some wonderful email and suggestions, ways we could make the site more useful and more extensive. One of those suggestions was to add a section for Classical Poetry. Ten days later, bleary-eyed and thinking in meter, I had winnowed the list of poems I just "had" to include down to 888 (seemed like a nice round number). I redesigned our graphics menus, adding several other suggested categories, and - on New Year's Eve - started to upload well over 1,000 pages to the web server.

It crashed, unfortunately, before I was even half complete. And it did so again, and again, and again, and eventually it dawned on me this wasn't going to work. The rcarnell.com web server simply could not handle the load. Coupling this with our increasing traffic at Passions and a few other factors, I decided that perhaps Passions in Poetry should become its own site, rather than the subdirectory of another.

The domain registration for netpoets.com is dated January 3, 1999, but it was over a week after that before I invited our first guests - our resident poets, of course - to tour the new site. By that time, traffic on the old site had risen to new levels and we were being visited by about 200 people every day. On January 13, I redirected all the menu options at the old site to point to the new one. 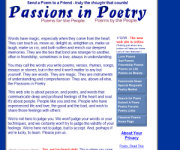 Interestingly, the Wayback Machine has an archived copy of the poetry site as it existed on rcarnell.com circa January 1999.

Those traffic levels, of which I was so proud at the time, were just a quiet whisper of what was to come.

We would finish up that first year, 1999, with just shy of two million unique visitors (1,959,148). The following year, 2000, we would top out at over ten million. And the numbers just kept rising and rising for most of ten years. Indeed, during that decade of incredible growth for us, Quantcast (which it to the Internet what the Nielsen Ratings are to television) ranked netpoets.com in the top 4000 busiest web sites in the world. There were times, especially around holidays like Valentine's Day, when I struggled just to keep the web server from crashing because more than 25,000 people were all reading our poetry at the same time.

The official birthday for netpoets.com remains January 3, making this site a smidgeon over fifteen years old. In Internet years, that's a lifetime. By way of comparison, yahoo.com was registered just four years earlier, on January 18, 1995.

We're just this side of ancient history.

The name of this web site has become something of a conundrum for me. Originally, as a subdirectory off my personal site, it was dubbed Passions in Poetry. Officially, that's still its name and you'll find many references to us as Passions (even though a soap opera later came along and tried to usurp that moniker). I honestly don't remember why, fifteen years ago, I chose netpoets.com as our domain rather than something more closely resembling the name Passions in Poetry. Availability no doubt played a part, of course, and I suspect even back then I was leaning towards short and easy-to-type domains. I still do.

As often as not, you'll likely hear me and others refer to netpoets.com as the main site. That's because Passions has spawned a few children of her own over the years, principally our forums at piptalk.com (can you guess what pip stands for?) and a curation site at 100-poems.com, where we periodically publish the poems with the most votes.

In early 2000, when we decided to publish our first anthology of poetry, I registered netpoets as a DBA business name in Michigan so I could open an account at my bank for book sales. That seemed more appropriate for a checking account than Passions in Poetry and a whole less confusing than main site.

If you do a Google or Bing search for netpoets you'll quickly surmise that THEY consider that our name. I guess that should make it official?

Shakespeare, of course, would tell us that a rose by any other name would smell as sweet, and, whether you think of us as netpoets, Passions, or simply the main site, I think our fifteenth birthday is a truly remarkable milestone in a medium that changes, quite literally, every minute of every day.

We have endured for 5,845 of those days. We have played host to thousands of poets and well over 200 MILLION visitors. We have, I think, withstood the test of time.

Happy birthday to us. 🙂